This allows the AER to customize its reserves and resources evaluation and reporting based on unique properties. 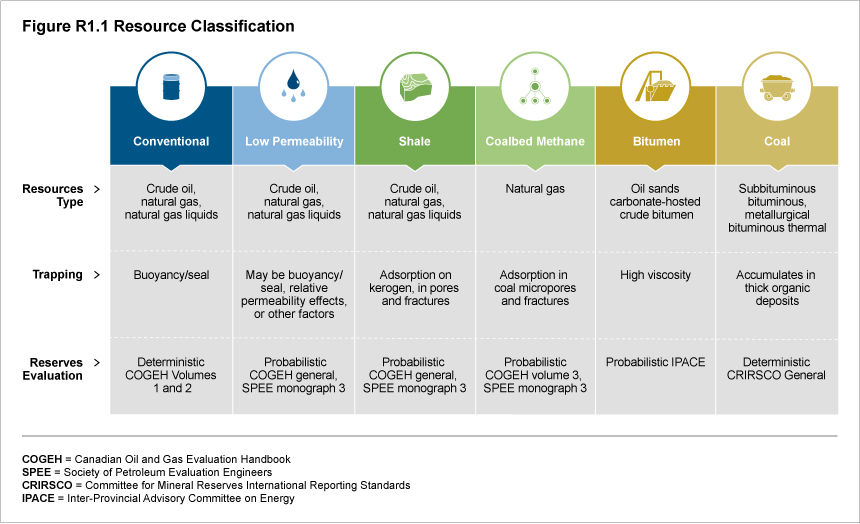 The term “resource” refers to a volume of petroleum that is estimated to exist originally in a naturally occurring accumulation within rocks, and includes all known and estimated volumes yet to be discovered.

For the majority of resource classes, the AER uses the Canadian Oil and Gas Evaluation Handbook (COGEH) for evaluation, which recognizes reserves, quantities of petroleum which are discovered and commercially viable, and two resource subcategories: prospective and contingent. Contingent resources are those that are discovered but not commercially viable, and prospective resources are those that are as yet undiscovered.

Bitumen resources and reserves are evaluated using a methodology developed by the Inter-Provincial Advisory Committee on Energy (IPACE), which was established in 1978. It defines resources as the initial volume in place, with two categories: initial established reserves and ultimate potential.

According to the COGEH, the term “reserves” refers to the remaining volume of petroleum that could be recovered from a known resource that is either already being produced or could begin production within about five years. In order to be classified as reserves, the volume must be recoverable under proven technology and production must be economically viable.

Estimates of reserves are used for many different purposes, such as