This EnerFAQ provides information about setbacks, what they are, and how they are used for public and environmental safety.

What is a setback?
A  setback is a minimum distance that must be maintained between an energy facility (e.g., well, pipeline, gas plant, or geothermal facility) and a dwelling, rural housing development, urban centre, or public facility. Setbacks vary according to the type of development and whether the well, facility, or pipeline contains sour gas. 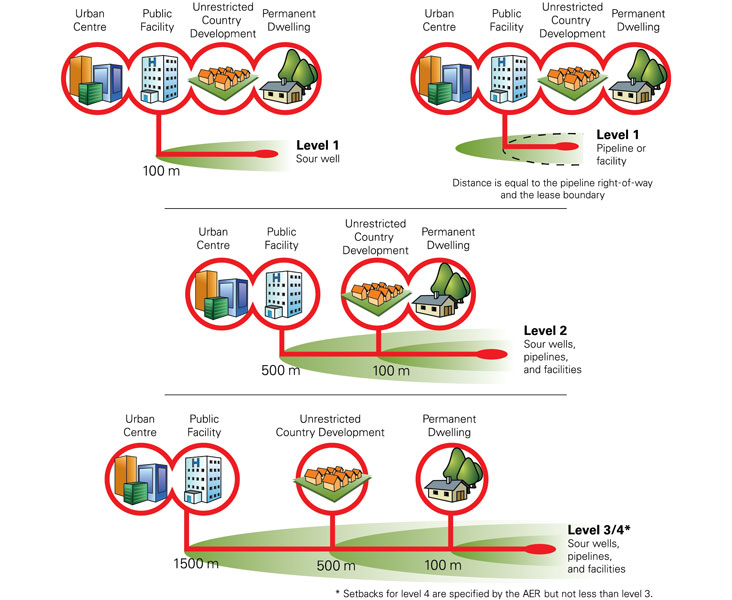 To better understand the principle behind a setback, let’s compare it to a 30-kilometre-per-hour speed limit near a school playground. Although the speed limit is not a “guarantee” of safety, statistically, it is much safer to have a speed limit than not to have one. The average driver can stop quickly at this speed if faced with an emergency, such as a child suddenly running into the street. The child’s safety isn’t guaranteed, but the odds are strongly in the child’s favour with the low speed limit in place. In a sense, setback distances function as the energy industry’s “speed limits.”

How long have setback distances been in effect?
Setback distances have existed in various forms for energy resource developments since early production days (pipeline rights-of-way are a good example).

How are setback distances determined?
The AER categorizes sour gas facilities into four hazard levels based on well release rates, pipeline release volumes, and hydrogen sulphide (H2S) content. There are predetermined setback distances for each level of sour gas facility. Once the appropriate level has been established for a facility, AER staff then examine the types of developments nearby and how people typically use the general area. For example, AER staff would check to see if there are houses, schools, or hospitals nearby. If necessary, a setback distance may increase due to these developments.

What are release rates?
The concentration of H2S and how fast it is coming out of the ground are the variables that determine the release rate.

What are release volumes?
Release volumes are specific to pipelines. A fixed amount (volume) of gas can be released from a pipeline once the valves are closed—this is called the release volume. Pipelines are built with emergency shutdown valves installed at preset points along the pipeline. When the valves detect pressure drops in the pipeline, they close automatically, stopping the gas flow through the pipeline and trapping the gas between the two valves closest to the rupture. That’s all the gas that can escape, and the amount of escaping gas can be quickly calculated.

Why are setback distances different for a farmhouse than for a large campground?
Setback distances can reflect site-specific considerations. Setback distances are greater for towns and major campgrounds to enable evacuation if necessary. It is easier to evacuate a single-family residence than a large number of people or an entire community.

What if I live near a sour facility?
AER setback distances are designed to reduce the risk to people from sour gas facilities to the lowest level possible.

What safety precautions does the AER require of industry?
The energy industry is required to maintain safe operations at its facilities. With pipelines, for example, the industry has developed many important safety practices, such as specially designed block valves and various kinds of pipeline monitoring systems. In the case of drilling wells, industry must comply with strict blowout prevention measures.

What if I am already living within a sour gas setback distance?
These situations are rare. Industry and municipal planning authorities have followed the same setback guidelines since 1979. If you believe this applies to you, contact the facility operator or the nearest AER field centre.

Is there any way I can change a setback distance that affects my land?
Setback  distances may change when either the rate or volume of the energy facility changes or when the type of development in the setback area changes. Release rates and release volumes may change over time due to dropping production from a well or the H2S content changing.

An example of altering land use is a landowner converting a large year-round campground designated as a public facility back to farmland and then building a family home. Whereas the campground required a large setback by the planning authority because of the potential number of people in the camp, a single farm residence would usually require a smaller setback because it would be easier to notify and evacuate one family.

What happens if an energy company wants to drill a well or build a facility close to my home?
The AER requires that companies follow section 5.4, “Category Type and Minimum Consultation and Notification Requirements,” of Directive 056: Energy Development Applications and Schedules when dealing with landowners and occupants. The company must provide affected landowners and occupants with factual information regarding the facility and explain the potential land-use restrictions that may occur because of the development.

What if I object to this development?
For some types of applications, the applicant must indicate in its application whether any landowners contacted have concerns about the application. The AER may direct the applicant to contact these landowners again to explore ways to resolve any concerns. Also, anyone who believes they may be directly and adversely affected by an energy resource application can file a statement of concern. See EnerFAQs Expressing Your Concerns – How to File a Statement of Concern About an Energy Resource Project.

Will I be compensated for the use of my land?
Decisions regarding compensation for placing energy facilities on your land do not fall under the AER’s jurisdiction and are the responsibility of the Land and Property Rights Tribunal when the Surface Rights Act applies. The Surface Rights Act does not apply to geothermal resource development. The Land and Property Rights Tribunal may be reached at 780-427-2444.

Additional Information
For more information on the AER and its processes or if you wish to speak to your local field centre or have questions about energy resource development in Alberta, contact the AER’s Customer Contact Centre: Monday to Friday (8:00 a.m. to 4:30 p.m.) at  1-855-297-8311 (toll free).

This document is part of the EnerFAQs series, which explains the AER’s regulations and processes as they relate to specific energy issues.

Every year the AER collects, compiles, and publishes a large amount of technical data and information about Alberta’s energy development and resources for use by both industry and the general public. This includes raw data, statistics, information on regulations, policies, and decisions, and hearing materials.

Publications may be downloaded free of charge from the AER website (www.aer.ca) or made available through the Products and Services Catalogue by contacting Data & Information Services (email: @email).

The information (including data) contained herein was collected and is maintained by the Alberta Energy Regulator (AER). Use of this information and other information (collectively the "content") is governed by the terms and conditions set ("Terms of Use"). Any access to or use of the content constitutes acceptance of the Terms of Use.