Pipelines and Other Infrastructure

Oil and gas pipelines and railroads are among the transportation infrastructure needed to support the development of Alberta’s vast energy resources. Refineries, plants, and facilities turn these energy resources into marketable products (see Figure 8.1) 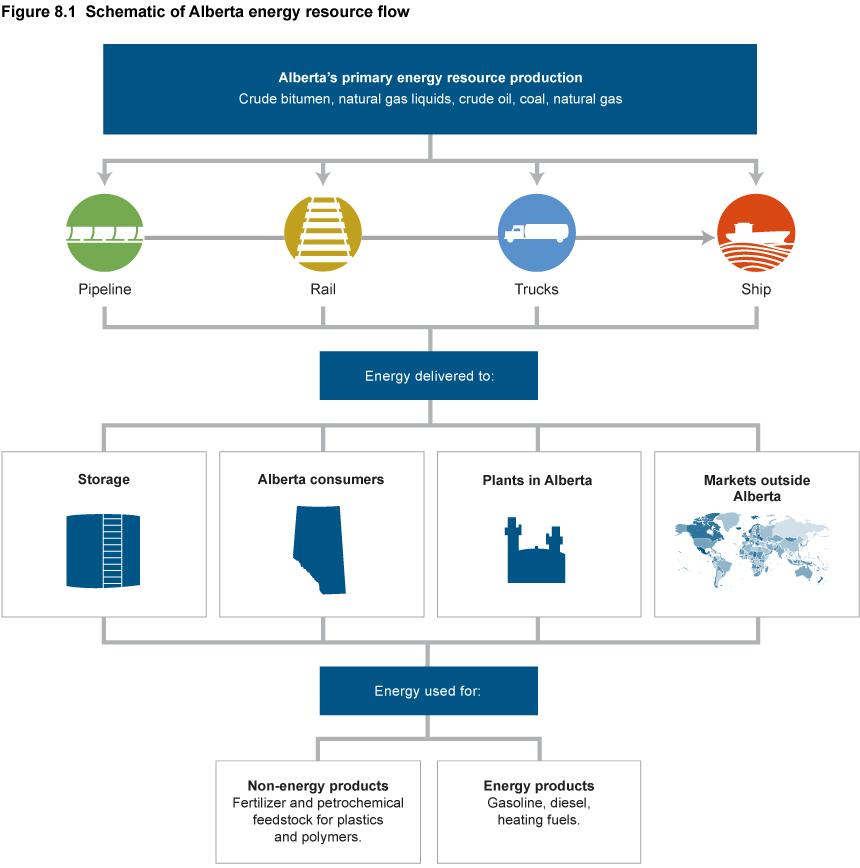 Thousands of kilometres of transportation infrastructure are needed to connect Alberta’s energy commodities to markets both inside and outside of Alberta. A network of pipelines has been built solely to transport energy resources. Other infrastructure, such as railroads, and electrical transmission lines, is shared with other industries and Albertans.

The AER regulates over 433 000 kilometres (km) of pipeline in Alberta. This includes 12 000 km of natural gas utility pipelines for which the AER conducts surveillance and inspections, incident response, and investigations because of a memorandum of understanding with the Alberta Utilities Commission (AUC). Oil and gas pipelines that cross provincial or federal borders are regulated by the Canada Energy Regulator (previously the National Energy Board).

Alberta’s intraprovincial pipeline system is highly integrated and includes gathering, transmission, and distribution lines that transport hydrocarbons from producing areas to major distribution and processing centres within the province’s borders.

At Edmonton, pipelines transport crude oil to refineries in Alberta. Crude oil is also delivered to locations outside of the province through Enbridge Inc.’s Mainline system and Trans Mountain Corporation’s Trans Mountain pipeline.

Heavier crude oil, such as raw bitumen, is unable to flow on its own through pipelines because of its high viscosity. It is typically mixed with a diluent to help it flow. In a few cases, it is transported through a heated pipeline. Condensate and upgraded bitumen are two main types of diluent used to lower the viscosity of raw bitumen for transport in pipelines.

Naphtha, light crude oil, and butanes can also be used to get the bitumen to meet pipeline specifications.

Raw natural gas, which includes other hydrocarbons and impurities, is transported from the wellhead by a gathering system to field processing plants. Field plants are usually located near the source of the gas and contaminants, such as water and hydrogen sulphide, are removed. Natural gas liquids (NGLs) may also be removed. Companies may extract more NGLs than what is needed to meet pipeline specifications in order to get full value for the NGL components.

Once the natural gas meets pipeline specifications, it is compressed and then enters a large transmission pipeline. Under compression, natural gas flows through the transmission system from areas of high pressure to areas of low pressure. Once the gas reaches its end market, distribution companies reduce the pressure for delivery through local distribution networks.

North America’s railroad network is extensive, linking almost all major cities and ports across the continent. This allows movement of products across borders and markets. Within Alberta, the railroad system crosses the province’s major energy-producing regions. While pipelines allow shippers to access only certain markets, rail allows producers to place their product on railcars and ship it almost anywhere on the continent serviced by rail.

Trains are loaded at transloading facilities, which include pipeline-connected storage hubs and rail terminals. The oil industry typically will use a unit train, which carries only one type of commodity bound for one destination and generally has about 100 railcars. Demand for unit trains has grown rapidly in recent years because they can make a single nonstop run, meaning they do not need to stop at different locations to offload different commodities.

Upgraders are oil sands processing plants that upgrade bitumen into lighter hydrocarbon products. They chemically alter the bitumen either by adding hydrogen or by removing carbon. Sometimes facilities do both. Upgrading improves the quality of the crude bitumen, producing a lighter, sweeter blend that can fetch a premium price.

In upgrading, most of the sulphur and other impurities contained in bitumen are removed. The sulphur is either stockpiled or shipped to facilities that convert it to sulphuric acid, which is mainly used to manufacture fertilizers.

Upgrading also produces an off-gas that is high in NGLs and olefins. Companies have primarily used this off-gas as fuel in oil sands operations. They are now processing increasing volumes of off-gas to remove the NGLs and olefins, which are then used as feedstock in the petrochemical industry.

Oil refineries use crude oil, along with upgraded and nonupgraded bitumen and pentanes plus, to produce a wide variety of refined petroleum products, such as gasoline and diesel.

Ethane and other NGLs are recovered mainly from natural gas processing. Gas reprocessing plants, often referred to as straddle plants, recover NGL components or NGL mix from marketable gas. They are usually located on main gas transmission pipelines at border delivery points. Straddle plants remove most of the propane plus (C3+) and ethane. The degree of recovery is determined by the plant’s extraction capability, contractual arrangements, and product demand.

Field plants may send recovered NGL mix to centralized, large-scale fractionation plants where the mix is separated into its different components, such as propane, butane, and pentanes plus. A de-ethanizer tower, along with a turboexpander, chills the natural gas to isolate ethane from other NGLs.